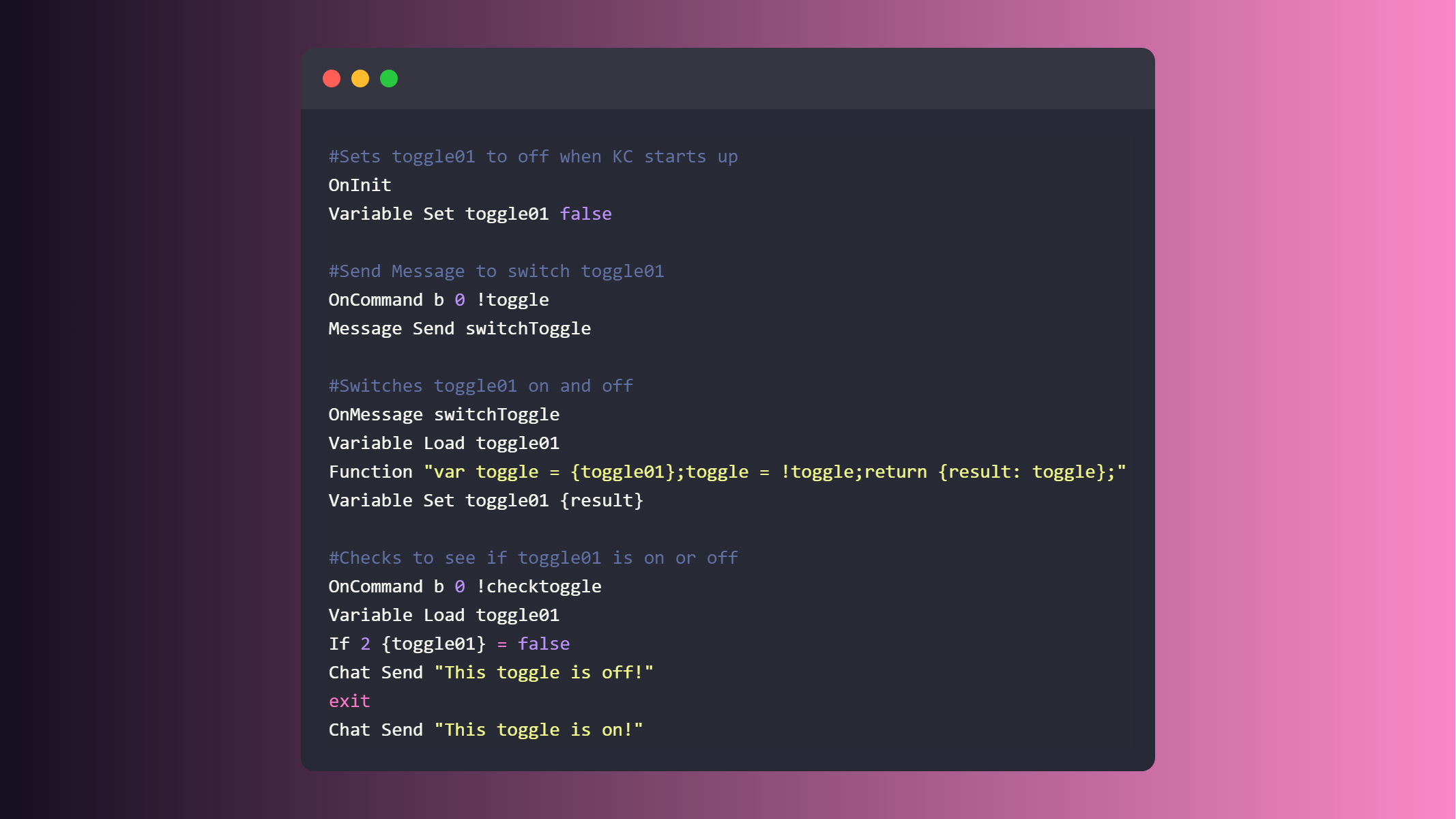 This is how I made a toggle framework for Kruiz Control. I use a version of this system to turn chat interactions, alerts, and sound effects with my Fallout 4 game on and off.

Breaking it down to its basic parts, this framework of events will take a false value and flip it to true (or vice versa) and save it to the toggle01 variable. You can then build other events that check the value of toggle01 and make them perform different actions depending on the result.

Usage: !toggle to switch back and forth between two states

Usage !checktoggle to check which state toggle is currently in

# Breaking Down Each Section

Our toggle works by switching a variable back and forth between true and false and allowing for different actions to occur depending on the value.

We use OnInit to create our variable called toggle01 and set it to false. This will happen every time KC starts up (refreshing the browser source, using the default !kcreset command.) Keep that in mind for whatever events and actions you tie to this toggle, as the default will be whatever you have set this variable.

OnInit Used to fire a set of actions when Kruiz Control starts.

Variable Set Used to set a variable during the current session.

# One Way to Activate Toggle

This event creates a command for the broadcaster to toggle the toggle01 variable from true to false or vice versa, depending on what it’s currently set to.

Using Message Send allows us to set up multiple triggers to fire off the toggle, not just a command. We’ve created a unique message called switchToggle that will do all the heavy lifting later in the code.

OnCommand Used to trigger a set of actions when a command is used at the beginning of a message.

Message Send Used to send a message and trigger other events.

This event is the meat and potatoes behind our toggle, which is triggered by our switchToggle message we set up earlier. Any event that uses the Message Send action will fire the OnMessage trigger if they use the same message.

Once the switchToggle message is received we use the Variable Load action with the toggle01 variable to get its current state. We then use the Function action to write some custom JavaScript code which will create a new variable called result. This new variable is set to have the opposite value of toggle01. Now we can set toggle01 to have the same value as the result variable, effectively flipping the switch. And now toggle01 is flipped until we run the same event! If we reset KC, it will revert back to its default value that we set in the OnInit event.

OnMessage Used to fire a set of actions when a message is sent with Message Send.

Variable Load Used to load a previously set variable during the current session.

Our Javascript is written in a specific way so that Kruiz Control can use the result of our custom coding while still maintaining the structure KC needs of 1 action per line. All code inside of the Function action is closed, meaning it doesn’t see or affect any code out of the quotes unless we specify it. We’ll need to pull in and push out variables that can be used outside of the function.

Looking at our custom code in the Function action, one can read it as “create a variable called toggle that uses the same value as our toggle01 variable we’re pulling in from outside this function. Then take the value of our newly created toggle variable and set it to the opposite of what it currently is. Finally, create a new variable called result that can be used outside this function that has the same value of our now modified toggle variable.” We can now use the result variable in this event as we need to. Note that our toggle = !toggle statement only works if the values of our variable are Boolean true or false.

Now we take everything we’ve built and test it. This command is just one of the many ways this toggle event can be used. There’s a lot to cover here, but the logic behind it is simple: Trigger, Load, Compare, Result. When the event is Triggered, KC Loads the variable to get its state. We then use an If action to Compare the variable to a value. Depending on the Result it will do a specific action.

In our example our Trigger is OnCommand, we Load the toggle01 variable, and Compare our variable to the false value. The Result chooses our actions of either Chat Send “This toggle is off!” if false or “This toggle is on!” if true.

If actions use logic operators to compare and can use Skip actions if the comparison is false, which can get confusing when doing double negatives or something similar.

The Exit action after the first Chat Send action tells KC to stop after sending the message in chat if toggle01 is false, but will be skipped if toggle01 is true.

If Used to determine whether or not the trigger should complete the rest of the actions.

Skip Used to skip over the specified number of lines in an event.

Chat Send Used to send a message to chat.

Exit Used to exit an event without processing the rest of the actions.

If you love Kruiz Control as much as I do, consider supporting the project on Patreon. This invaluable tool that Kruiser8 has created for Twitch streamers deserves as much support as it can get. 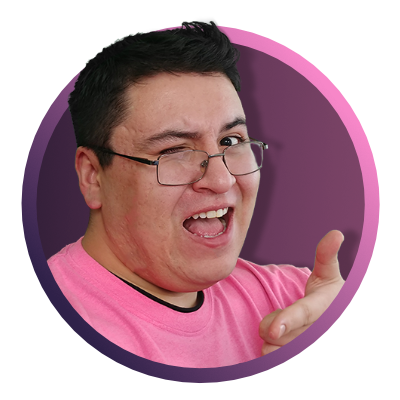 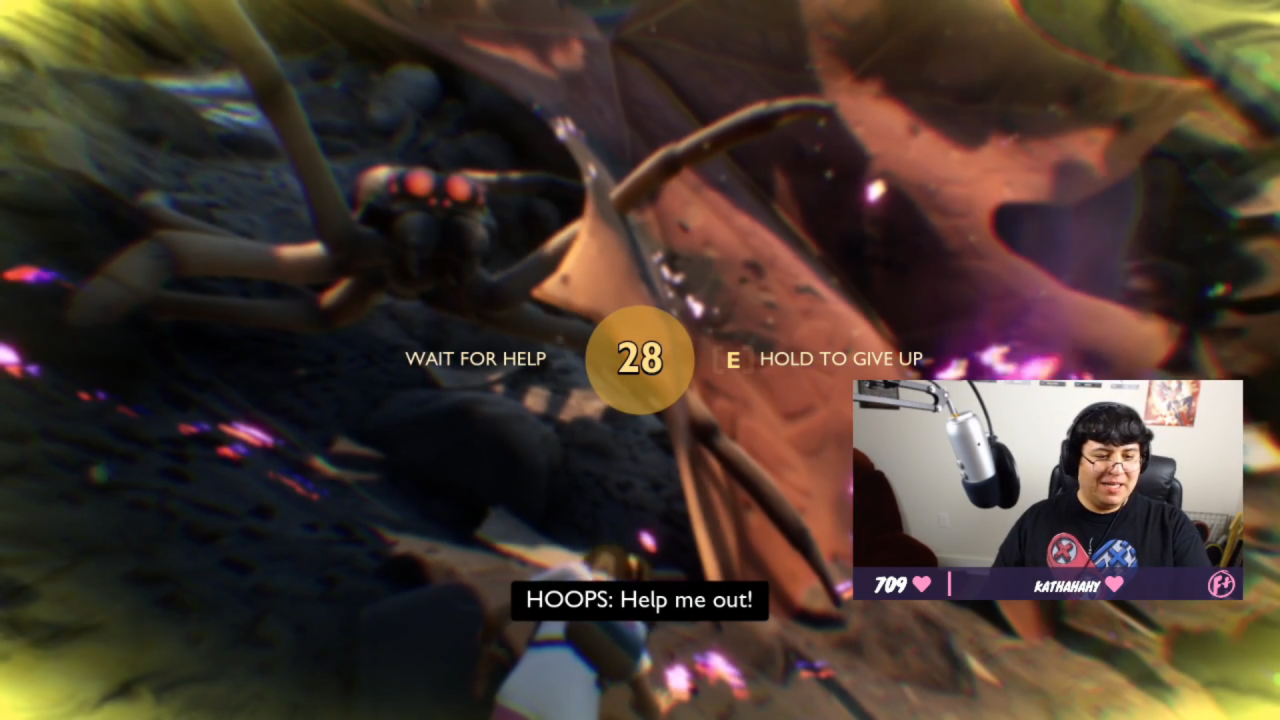 Love giant spiders? How about 3? 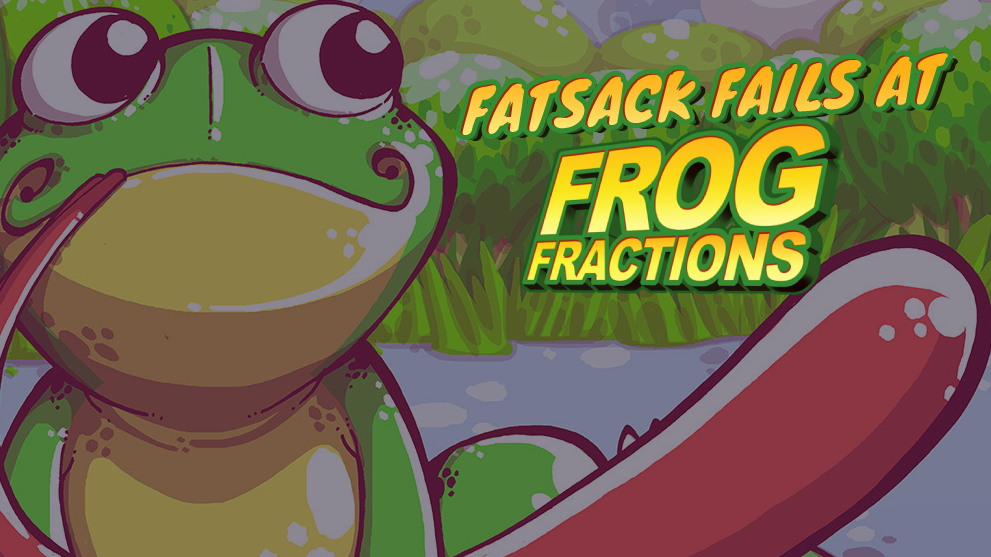 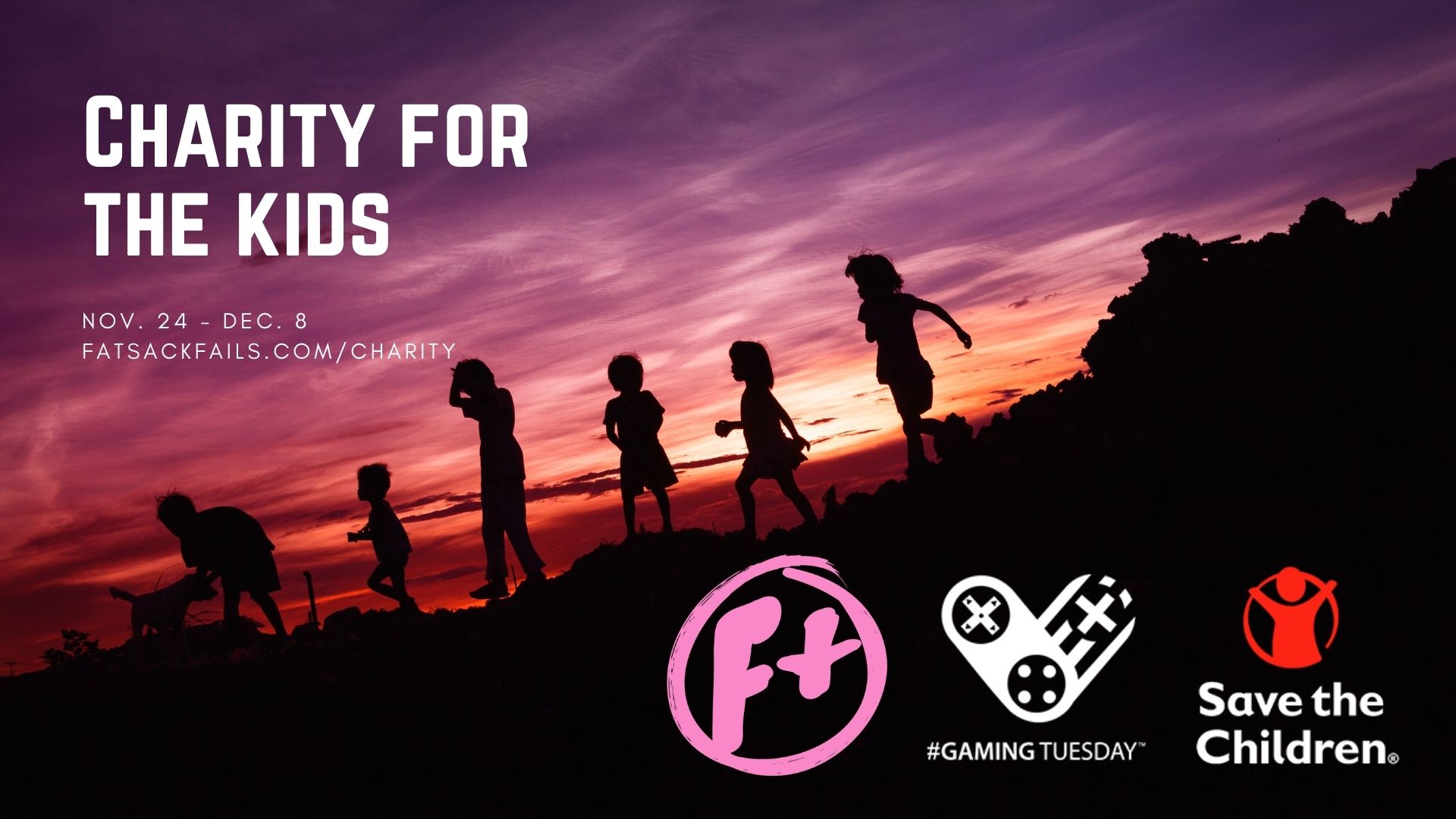 Save The Children #GamingTuesday 2020 Charity Event

Donate for the kids!